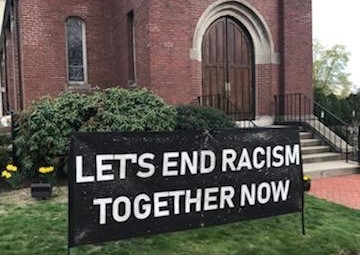 The Anti-Racism Committee formed in July 2020, after the killing of George Floyd by Minneapolis police on May 25, prompted a national reckoning on race. With God’s help, this committee aims to bring our congregation to a place of deeper understanding and rejection of the racism and white supremacy that pervade society today. In line with the national Episcopal Church, they have focused efforts in three areas - LEARN – PRAY – ACT, so that we may:

For LEARN, parishioners have participated in the Sacred Ground program, developed by the Episcopal Church. Groups of 10 meet to discuss documentary films and readings that focus on Indigenous, Black, Latino, and Asian/Pacific American histories as they intersect with European American histories. The committee also hosts monthly anti-racism activities to discuss movies and books.

For PRAY, the committee developed a prayer for racial justice and reconciliation that has been incorporated into the Sunday morning services and encouraged for private prayer.

Our hope is that learning and praying will lead us further to ACT. Several members of the committee have participated in the Sunday afternoon Black Lives Matter demonstrations on the Natick Common.

Our Delegates to Convention and our rector, Rev. Becky Binns Gettel, were among the sponsors of a resolution asking the diocese to create a committee within the Episcopal Diocese to assist congregations with funds derived from the trade of enslaved peoples to make reparations using those funds. The resolution was passed at the annual diocesan convention in November 2020.

Sacred Ground is a film- and readings-based dialogue series on race, grounded in faith. Small groups, called Sacred Ground Circles, are invited to walk through chapters of America’s history of race and racism, while weaving in threads of family story, economic class, and political and regional identity.

The 10-part series is built around a powerful online curriculum of documentary films and readings that focus on Indigenous, Black, Latino, and Asian/Pacific American histories as they intersect with European American histories.

Sacred Ground is part of Becoming Beloved Community, The Episcopal Church’s long-term commitment to racial healing, reconciliation, and justice in our personal lives, our ministries, and our society. This series is open to all, and especially designed to help white people talk with other white people. Participants are invited to peel away the layers that have contributed to the challenges and divides of the present day – all while grounded in our call to faith, hope and love.

Almighty God, our Creator and constant companion, you know our hearts, you see our struggles.
We kneel before You in prayer for racial justice and peace in the world.
Only through your grace, can this be envisioned and attained.
Open our ears, let us hear your message of love, justice and truth.
Open our eyes, let us see one another as you see us, beloved.
Fill our hearts, teach us to love our neighbors as you love us, unconditionally.
Grant peace to the grief-stricken, heal the wounds of loss with your Divine consolation.
Lift up those wronged by a broken system, channel anger into energy for lasting, constructive change.
Restore hope in the face of heartbreak, empower the weary to continue working for racial justice.
Govern our minds, teach us to discern privilege, discrimination and the abuse of power.
Lift our voices, give us words to speak up when racism or injustice deny any soul its dignity and human rights.
Inspire our youth with your vision, empower them to take up the struggle and lead us on.
With the power of the Holy Spirit, work through us all, so that one day,
Justice may roll down like waters, and righteousness like a mighty stream.
In the name of a triune God of great love.

Early on Sundays, St. Paul's gathers for a simple Eucharistic Liturgy with no music. This service runs about 35 minutes long.

Join with the community of St. Paul's Natick as we gather later each Sunday morning for a Eucharistic Liturgy with our choir and music minister. This service runs a little over an hour long.

Stewardship is about more than money. It’s about giving our time, talent and treasure to take care of the world that God has created for us. As God’s people we are stewards of creation. St. Paul’s receives no financial support from the Diocese. Our rector, staff and programming would not be possible without contributions from you.

Our campaign theme is More than Enough, and it comes from the end of Luke’s version of the feeding of the five-thousand. Responding to Jesus’ call, the gathered crowd turns their pockets inside out, shakes out their blankets, rummages through their parcels to find enough to take care of the needs of the community. And what do they realize? That by the miracle of faith and the action on Love, there was more than enough, an abundance of leftovers!

Every gift of wealth, works and wisdom goes toward our ministry and mission, and your gift is essential to us.

Find out more about our 2023 Stewardship campaign